"D4 Diablo" - Aggressive Stormtrooper that is constantly on the move. 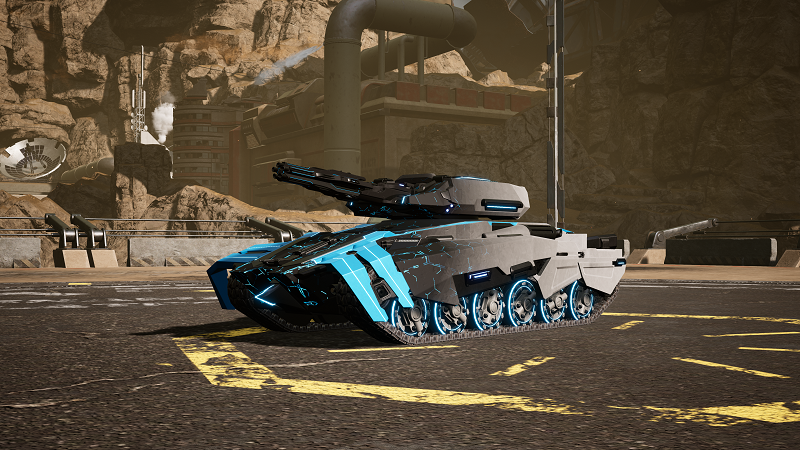 History of the D4 Diablo Exotank

The Velund Military Works developed this exotank to support Confederate platoons in battles on the Martian Badlands. After several tests at Earth's military ranges, a batch of exotanks was sent to the Deimos orbital station near Mars orbit.
The transport ship was attacked and captured by Syndicate forces under the command of the mysterious "Cyber Siren. Several dozen D4 Diablo's fell into pirate hands.
Since then, this exotank has been one of the Syndicate's favorite weapons, perfectly supporting their favored tactics of swift raids and retreats. A Syndicate rider named "Matilda" destroyed more than a dozen Confederate exotanks at the Battle of the Night Maze, deftly maneuvering the Diablo through the sharp debris of the Martian Rocks. To this day, the Confederates prefer to retreat if they see a Diablo under "Matilda" control on the battlefield.
Confederate fighters have never been able to master this model at the level of their enemies.


Key Characteristics of the D4 Diablo

- Diablo must close in to deal heavy damage.
- Main Gun does no damage at 100 meters or farther
- Turbo Ram and Seismic Strike deal damage up close to the enemy

"Main weapon "Gasta" - The faster the speed, the faster the rate of fire.
- Passive skill, greatly increases effective damage of the main cannon
- Effective shooting on the move; minimal damage at rest
- While Diablo is moving at maximum speed, he deals extremely high damage.

"Impulse Rounds" - Increases the damage by a factor of two for 6 seconds.
- Since the duration of the ability is short, you must use it at the right moment: An enemy has been spotted and you can shoot at him.
- Diablo moves at high speed.

"Turbo Ram" - Accelerates the tank and causes great damage on impact with the enemy
- Diablo becomes uncontrollable and drives in a straight line (cannot turn or brake);
- To cancel the effect of the ability you can:
- Wait for 3 seconds (ability time) - the ability itself will end;
- Press the ability key again;
- crash into a terrain element, structure, etc.
- Diablo does not take collision damage during "Turbo ram". This is a passive ability bonus.
- The ability can be used to:
- Deal fast damage to an enemy;
- Chase or flee from the enemy;
- To speed up and increase the rate of fire of the main weapon.

"Seismic Strike - Deals large amounts of damage around the exotank. The closer the enemy is to Diablo, the more damage.
- Ignore armor.
- The best time to use this skill is when an enemy is "in front of" the Diablo, for example after hitting him with Turbo-Taran.
- Great for finishing off enemies

"Flux Engine" (rank 2)
- Increases Diablo's speed by 35%. The speed of Gast's main weapon also increases.
- The modification is effective when the map has a lot of open spaces for acceleration, Diablo can often accelerate
Carcass (Rank 2)
- Increases damage from Tubro Taran by 1.5 times.
- The modification is effective when Diablo uses and often hits with turbo ram.

Photon Pulse (rank 4)
- Increases the duration of Pulse Ammo by 2.
- Effective in combination with Flood Drive or when the Diablo has a chance to be hit for a long time

- Diablo is an exotank with relative low defense, but with very high instant damage due to abilities. This forces him to play raids. Being under enemy fire for long periods of time is deadly for Diablo;
- Diablo does the maximum amount of damage (no tank survives without extra protection) if:
1. Diablo attacks the target from long range;
2. Diablo uses Impulse Ammunition from the beginning of the attack;
3. the Turbo Ram is used close to the target;
4. At the moment of collision Seismic Explosion is used.
- Moving during a skirmish is almost always by forward movement only. Reverse is inefficient and dangerous.
It is much more effective, after passing the enemy, to turn around and accelerate in the opposite direction (as knights did in equestrian duels with a spear!).
Top
Post Reply
1 post • Page 1 of 1