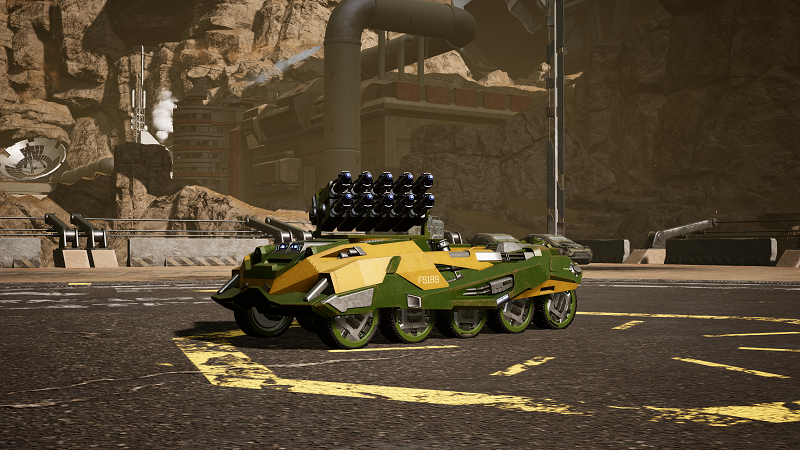 - Diversionists benefit from being close to the enemy to deal damage with both main weapon (up to 100m) and abilities (used up close);

"Magnetic Mine. Attracted to the nearest enemy to detonate. If the enemy is not nearby, the mine waits.
- The maximum number of simultaneously existing mines is 4. If 5 are set, the very first one disappears;
- The first 10 seconds after setting (there will be a timer on the mine) the mine is inactive. That is, it can not be attracted to enemies and explode;
- The mine is activated if the enemy tank approached it at a distance of less than 30 meters and inflicts 70 damage. When activated, the mine deals damage within a radius of 10 meters;
- Can be put to tasks:
- Territory control (the enemy, seeing a mine, will be wary or won't enter a certain territory at all). For this purpose it is best to put several mines on a key point;
- Inflicting fast damage (in conjunction with an impulse bomb). To do this, it is best to place mines in places with the highest probability of enemy exotanks passing through, as well as behind sharp turns and obstacles (in which case the enemy may not be prepared for them);
- To inflict additional damage during combat. Mines explode if the enemy does not leave the area before activating it.
- Can be destroyed by Cyborg's Radio-Electronic Suppression.

"Adaptive Camouflage. Makes the Saboteur invisible to enemies.
- You can place a Magnetic Mine and a Pulse Bomb (and activate it as well) during the ability, but using the main weapon and Shock Trap takes you out of invisibility;
- Can be used for tasks:
- Stealth infiltration behind enemy lines and attacking from behind OR capturing points;
- Undetected mining of suspected enemy positions and routes;
- Escape from combat;
- May be illuminated by Cyborg's Active Sonar ability.

"Shock Trap. Disables nearby enemies.
- Incapacitates all enemies within a 20 meter radius for 5 seconds. Diversion himself out of sight;
- Can be used for the following tasks:
- Controlling enemy exotanks for subsequent damage OR escape;
- Interrupting time-consuming cast abilities (main weapon of Storm, Dragon, etc.);

"Impulse Bomb. Deals massive damage when detonated.
- Places a Visible Activatable Bomb (detonates in 6 seconds after setting) with damage of 250 units within 50 meters;
- Used for:
- Destroying multiple enemies;
- Killing an enemy with a small amount of toughness;
- Similar tasks to those of the Magnetic Mine.

"Double Mine" (rank 2)
- It is possible to place 2 mines at once;
- The modification is advantageous if the team's strategy is to defend allied positions under its control.

"Holographic Module (rank 2)
- Increased by 2 times the duration of Adaptive Camouflage ability;
- The modification is beneficial if the saboteur/team's strategy is to recapture enemy positions.

"Discharge Amplifier" (rank 4)
- "Shock Trap" now deals 50 damage, ignoring armor;
- The modification is beneficial if:
- Diversionist/team strategy requires an increase in total damage (DPS);
- The saboteur has chosen to be a solo exo-killer, meaning he plays through a strategy of finding and destroying rogue enemies.

"Shock Mine" (rank 4)
- "Magnetic Mine" now disables enemies for 2s;
- The modification is beneficial if, on a team, there is enough damage and there is a need for additional control.

General Tips
- The basic characteristics make the Diversionist quite fragile, but the most mobile exotank in the game;
- Each projectile fired by the Diversionist flies on a trajectory taking gravity into account. If the enemy is far away, you need to consider not only the force of gravity, but also the speed of the projectile flight. That is to shoot with a slight advance;
- The Diversionist has a small blind spot right in front of the exotank from the front. The size of the spot is about 1.5-2 meters. In order to attack an enemy that is directly in front of you, you have to move back a bit;
- With the game's highest mobility rating, the Diversionist can go head-to-head against almost any enemy. The Divert's power is that he can get away from the line of sight very quickly, driving up behind the enemy and dealing damage to the enemy's most vulnerable parts;
- The Saboteur can be played in different ways, depending on the team's strategy and the player's desire. You can either focus your forces on destroying single targets, capturing and recapturing enemy points, or play through team assistance with controlling enemy exotanks.
Top
Post Reply
1 post • Page 1 of 1